An Interview with Dr. Clive Svendsen

Recently, I had the pleasure of speaking with an incredibly accomplished yet humble scientist, Dr. Clive Svendsen, director of the Cedars-Sinai Board of Governors Regenerative Medicine Institute.

This interview focused on the advances his laboratory has made towards treating amytrophic lateral sclerosis (ALS, or commonly known as Lou Gherig’s Disease). ALS is a relentless and fatal neurodegenerative disease which carries with it an average life expectancy of two to five years from diagnosis. ALS damages and destroys long nerve cells, known as motor neurons, in the brain and spinal cord. As their name implies, motor neurons are in charge of movement. The long motor neurons extend from the brain down to the spinal cord and then to muscles throughout the body. When these motor neurons degenerate and die, it becomes difficult—and then impossible—to control movement. Loss of motor neurons causes paralysis, resulting in difficulty speaking, swallowing and eventually breathing, leading to respiratory failure and ultimately death. 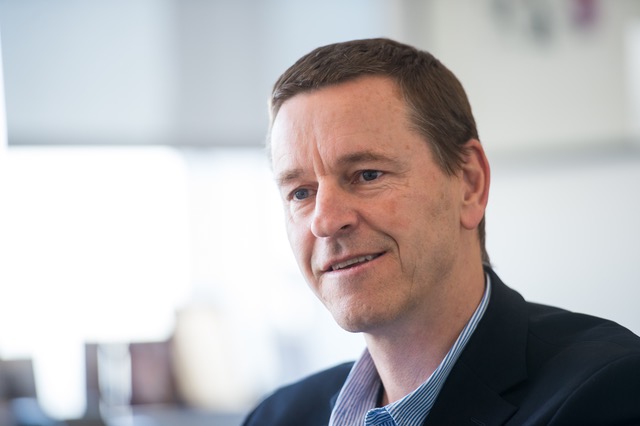 Combining the two ground-breaking approaches of stem cell biology and gene therapy, Dr. Svendsen’s studies have led to the initiation of a Phase 1 clinical trial for ALS at Cedars-Sinai that is funded by the California Institute for Regenerative Medicine (CIRM). The trial delivers a specific neural stem cell population directly into one side of the spinal cord of patients with ALS. These cells are modified to produce a specific protein called GDNF (growth-derived neurotrophic factor), which promotes survival of many types of cells. When delivered to ALS patients, it is hoped that that transplanted cells will produce GDNF long-term and “save” dying motor neurons, and perhaps prevent the serious complications that accompany the disease.

I was very interested in learning more about this trial’s status:

Dr. Svendsen only commented that the trial is currently underway and is expected to take two years.

Impressed with the responsible and cautious approach undertaken by Dr. Svendsen and his team, we continued:

Dr. Svendsen emphasized the main goal of Phase 1 is to test safety. He firmly believed that only the outcome of this first phase of the trial can dictate the next steps. Just as I would expect from a true scientist, he was cautiously optimistic: cautious because he repeatedly mentioned that the planned two-year follow up needs to be completed before we can call this therapy safe and right now is “too early to tell”; optimistic because the cells used in this trial have been tested in animal studies and shown to be safe and effective. Regardless, he emphasized that ongoing medical monitoring in patients is required before any conclusions can be made about the application of the cells in humans.

A bit of an anxious moment for me: I wanted to get Dr. Svendsen’s opinion on another ALS trial conducted by BrainStorm Cell Therapeutics:

BrainStorm recently announced its progression into Phase 3 – an enormously costly project that is in part – $16 million (yes, that is only in part!) – supported by CIRM. There must be some kind of competition between these two trials, I thought! I couldn’t be more wrong:

Dr. Svendsen first described how wildly different the Cedars-Sinai and BrainStorm trials are:

He briefly marched through the list of differences between the two trials, starting with the cell types used, where the cells are transplanted, what the approach is in each trial, and most importantly, the number of injections required. He emphasized that the BrainStorm trial is likely to need multiple injections whereas the Cedars-Sinai trial is a single injection. In the end, Dr. Svendsen finds Brainstorm’s approach a reasonable one. Since his goal is finding treatments, he believes that both trials should continue to acquire the necessary data and the most effective approach should ultimately be delivered to patients.

Given that both of these trials have received funding from CIRM, I could not help but ask Dr. Svendsen’s opinion about the possibility that CIRM may run out of funding in the next couple of years and how that would affect the stem cell landscape:

Dr. Svendsen gave a huge amount of credit to CIRM and its efforts. He believes that Prop 71, a 2004 initiative passed by Californians to support stem cell research over ten years, has made it possible for us to translate basic biology into potential therapies. He firmly believes that it is because of CIRM that diseases like ALS and retinitis pigmentosa (which leads to vision loss) could be close to a treatment, and diseases like SCID or “bubble baby disease” (a fatal genetic disorder affecting children) could be cured.

Finally, I asked Dr. Svendsen if he wanted to share anything else with our readers at Americans for Cures:

“The patients going to these early trials are the heroes. Rest assured, we’ll be moving forward as fast as we can.”

We hope that California continues to support the research of Dr. Svendsen and other scientists who have been working tirelessly to bring stem cell therapies to patients. 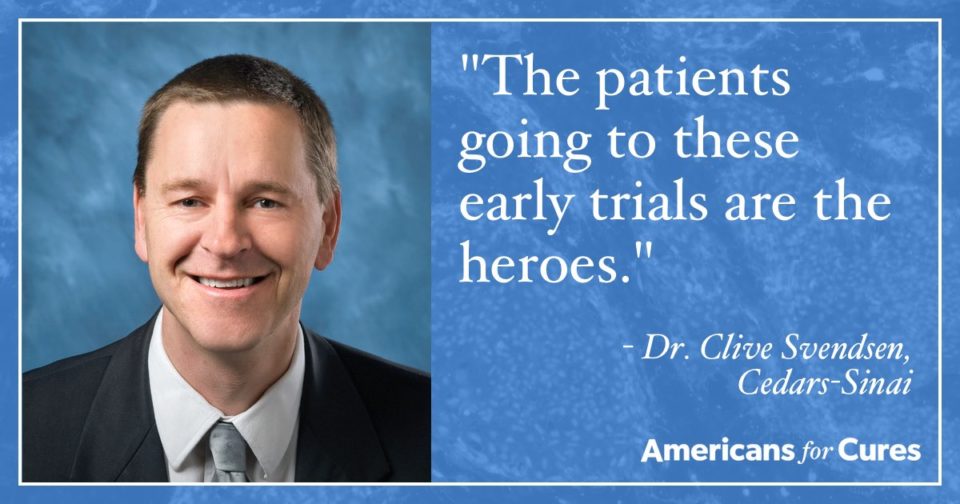