Meet February’s Champions Award recipient, Kristin Macdonald. Kristin’s dream was to work in Hollywood as an actress and television host, but her plans were altered after she was diagnosed with Retinitis Pigmentosa (RP). Consequently, she decided to work behind the scenes in entertainment. RP is a rare degenerative condition that causes blindness over time. Kristin enrolled in a stem cell clinical trial at UC Irvine, led by Dr. Henry Klassen, with the hope that it might stop the decline of her vision. While the trial is currently testing patient safety, early signs are positive, and the small dose that Kristin received has her seeing more light than she has in a decade. Today, Kristin is a motivational speaker, an Americans for Cures Patient Ambassador, hosts a podcast, and, although cooking is a challenge for her, she can still make a mean pasta sauce.

We spoke to Kristin to learn more about her experience of living with vision loss and what motivates her to do the amazing work she’s doing.

Q: Why is the patient’s voice important in any research advocacy?

It’s important because voices affect change. It’s so important not just for the patients who have been waiting for decades for a cure but also for the researchers, people with PhDs, and students to get a patient advocacy perspective—it changes their mindset. We all need each other—I wouldn’t be anywhere without their research, and they wouldn’t be anywhere without me, someone to test it out on.

It’s also important for people in California to know that they voted to fund stem cell research and that we need to do this. Some of those voters, or their loved ones, might need stem cells one day.

Q: How do foundations and patient advocacy organizations have a positive impact?

I don’t know where I would be without the Center for the Partially Sighted and the incredible skills they gave me, at low to no cost. They paid for mobility trainers, psychological counseling, help with technology and taught me how to function in my house (since I live alone). I have a volunteer who comes to my house, reads my mail, and does my bookkeeping. I learned how to manage my life, but as independent as I want to be, I still have to rely on other people to do so much.

Q: What’s it like being a patient ambassador? What is challenging or most difficult about the role? What’s rewarding?

After going through the denial and sadness that came with my vision loss, reaching out to groups made me aware that there were people coping with conditions much more difficult than mine, such as Huntington’s disease.

Americans for Cures allows me to feel as though I belong to a community. It gives me peace of mind and enables me to sleep at night. I’ve also met a lot of new great friends—they’ve become jewels in my life. It’s nice to be part of a larger team.

Being a patient ambassador is an honor, and it’s the way change happens. All it takes is one person. Look at Americans for Cures’ Chairman Bob Klein, who led the campaign for Proposition 71 in California in 2004.

Q: When did you feel your advocacy has a positive impact?

Through my Second Vision workshops, I’ve had the opportunity to speak to companies, homeless centers, and even the US Navy. The workshop is about reinventing your life’s vision after the first one fails. We all suffer from loss and the fear of change, and we have to figure out our next steps. Getting out of denial and embracing gratitude are good places to start. I cover a lot of this on my podcast and website, www.secondvision.net.

When I was giving a speech for people going back into the workforce, a woman came up to me in tears. She had written down everything I’d said in a journal. She had been ready to give up—she had lost her husband and her house. This woman was ready to kill herself. She wrote me a letter saying how I changed her life.

Another time at one of my talks in Berkeley, a researcher told me, researcher told me, “We don’t get to talk to patients. You have motivated me to keep doing what I’m doing.” Doctors have also approached me to say I’ve given them another perspective on their work.

Q: What’s your argument to lawmakers and the general public for funding research for rare diseases like RP?

I used to work behind the scenes in Hollywood, and I got to meet Christopher Reeve when we were both working on an Easter Seals Telethon. In fact, I read him his cue card which said, “You never know, you’re only one step away from a disability.” Ironically, several years later, Christopher, best known for his portrayal of Superman, had his unexpected accident and eventually, he passed away. He was a wonderful person, very beautiful and just took my breath away, but his spinal cord injury was his kryptonite, and stem cell therapy was not available at the time.

I’d tell lawmakers, and the general public, look at California. Stem cell research has been years in the making, and the most phenomenal things are happening. Scientists from all over the world come here to do research. It’s going to change and save lives. If I could go to the White House, I’d hand out personalized blindfolds and put them on everyone and tell them, “Try to function in your life without your eyesight. What would you do then? How would you get yourself out of the mud?”

Q: Tell us about Dr. Klassen’s clinical trial in which  you participated and what makes it special?

I call myself a California lottery winner. I was so excited to participate in the clinical trial. I’d been talking about stem cells before this, and now I was going to participate. On the day of the treatment, they were driving up the cells from Irvine, and we were in Beverly Hills. There was traffic, and it was time sensitive that the cells got there as soon as possible. We were all afraid the car wouldn’t make it in time, but it did. And after Dr. Boyer injected me with the cells, everyone in the room thanked me for being the first patient for this trial. Nobody knew what to expect. About two and a half months later, I started to see more light. It’s been three years, and after participating in the trial, my vision has not deteriorated, which is important because RP typically gets worse over time. Now the doctors are working to increase the doses.

RP is degenerative, and my vision has improved. For example, I can now see parts of a car and bits of my mascara wand, which is helpful because once I put black eye pencil all over my lips. Seriously, I was not able to see these things before the stem cell injections. Emotionally, stem cell therapy has helped so much. It helps me sleep at night. Over the years, I always had a haunting voice in my head reminding me that I was going blind.

Q: Anything else you think is important for people to know?

It’s important to get involved. By doing so, you access important information, you make amazing friendships and great connections, and you affect change. Becoming part of the solution allows you to design your purpose in life around your involvement. This is also gratifying from a spiritual perspective. You’re part of a greater community. You’re giving back. The gifts that result are immense. 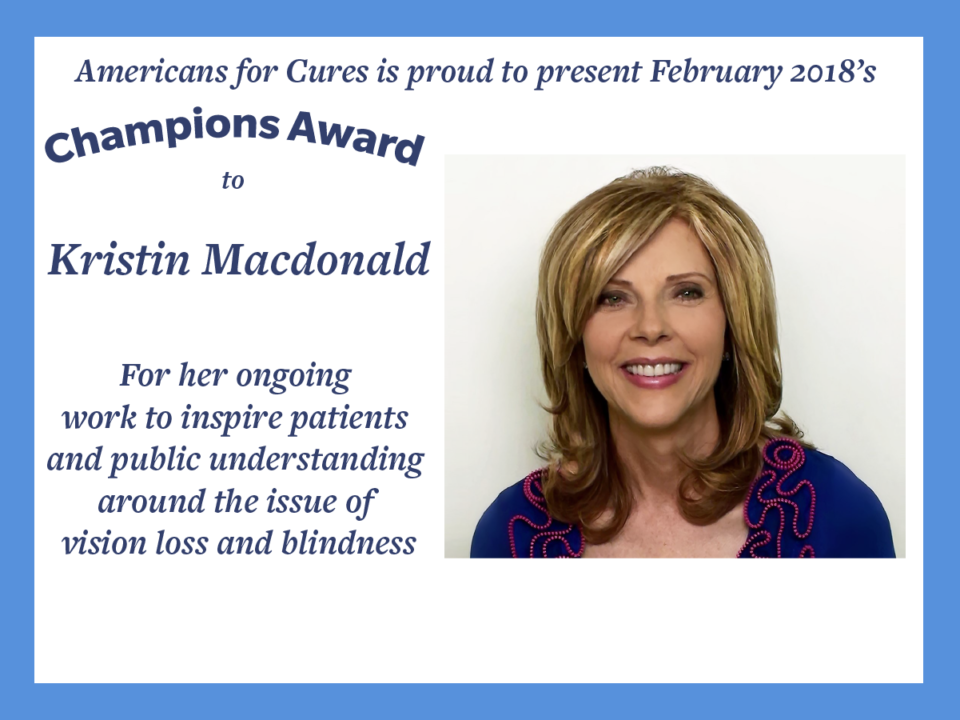