Meet April’s co-Champions Award recipient, Bart Narter. Bart was an avid cyclist for decades before he was diagnosed with Parkinson’s disease. We spoke to Bart to learn more about his experience of living with Parkinson’s and what motivates him to do the amazing work he’s doing. 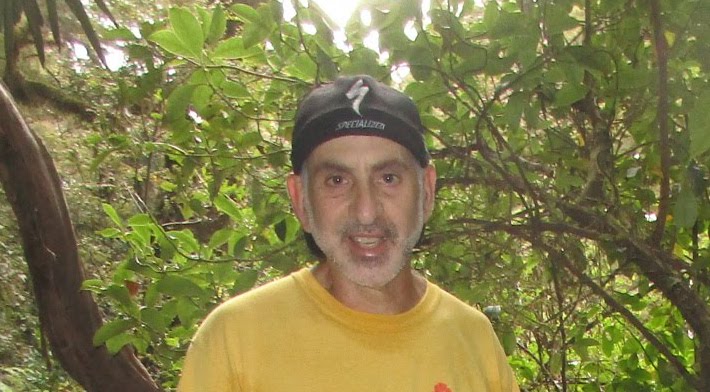 Q. Tell us about your personal story of being diagnosed with Parkinson’s, how did you feel?

I was diagnosed about six years ago in December of 2011, but let’s go back a year before my diagnosis. I’m into cycling and I noticed when I stood up on the bicycle and came up a steep hill, my left arm would shake just a bit, less than a second. I attributed it to a pinched nerve since I was pushing and hammering on the bicycle, and putting a lot of force on my body. I did not think much of it.

Then I had knee surgery, the doctors just had to trim a bit of meniscus. As a result of running marathons, my knee got shredded up. After I had the surgery, I did not walk quite right. I was about 98% fine, but something felt weird. The doctor ran an MRI and he said it all looked good.

I did a big bike ride where I rod to the top of a wet and rainy mountain and my left arm took off on its own, it began to shake to the point that I could not control the bike. By that point I knew this was not a pinched nerve.

I went online and found The Parkinson’s Institute, which is one of the top fifteen centers in the country. I downloaded their admissions forms, filled them out, and faxed them. The next morning I went there and that’s how I started my Parkinson’s journey.

Q. How was it like at The Parkinson’s Institute? What were you doing?

The Parkinson’s Institute is a clinic and research facility and one of the ways I thought I could participate in helping solve the problem was participating in as many research studies as I could. And the one I got started with was the Parkinson’s Progression Markers Initiative (PPMI), which is an initiative at the Michael J. Fox Foundation. There is no biological test for Parkinson’s. Basically, they look at your symptoms and eliminate every other possibility.

It would be very good to have a biological test for Parkinson’s that would measure how bad your Parkinson’s is because that would make it easier to test drugs and objectively see how effective they are against Parkinson’s.

Right now doctors use a mechanism that grades you based on various traits. And that’s where we currently are to measure how advanced your Parkinson’s is. There are other tests, but they’re all subjective.

The Michael J. Fox Foundation is running a study site, which is one of many. I got involved in that and started becoming more active in the community and started going to The Willow Glen Support Group.

Q. How did getting involved in these organizations make you feel?

This allowed me to look at things down the road. There were people who had been living with Parkinson’s for 10 to 20 years and they had a lot of wisdom of how to manage different stages of the disease. I quickly became the leader of the group, mostly because I know how to hook up AV equipment—e.g. hook up the laptop to the projector. I met a lot of people in the group that were doing very well even though they had Parkinson’s a long time and I also met people who were not doing so well.

So far my Parkinson’s has not been very serious. A lot of people cannot even tell that I have Parkinson’s, including people with the disease—in spite of the scars I have on my head from deep brain stimulation (DBS). They place a pacemaker-like device in your chest and run wires underneath the skin to two brain probes that go to the part of the brain that’s not working right and shock it.

Q. What was the nature of the work you were doing with the institutes?

I was being a subject and helping researchers in other ways. One researcher, was short a subjects for a control group and I was able to get ten of my friends to be a part of the control group. Another doctor needed help doing a cost model for a Parkinson’s directory of all the people with Parkinson’s in California. I have an MBA and I did some standard spreadsheet work that the doctor was very impressed with. What I basically did was gather data to see how much it would cost to do trials for the whole state and I was able to analyze the numbers. Now the state of California is going to fund this and know who has Parkinson’s, where they live, and figure out some demographic issues to find any patterns that can identify factors in people with the disease. Exposure to pesticides can cause Parkinson’s and people in the Central Valley of California are more likely to get it. But the number one risk of getting Parkinson’s disease is old age.

Q. What can you tell us about the work you’re doing in Washington D.C.?

I was in Washington D.C. on behalf of the Parkinson’s Policy Forum, which is part of The Michael J. Fox Foundation. I worked in Washington D.C. as a group leader. I along with others visited Members of Congress and Senators to let them know how important it is for them to fund the National Institute for Health (NIH) for all diseases.

Q. What’s your argument to lawmakers for investing in medical research into Parkinson’s?

Parkinson’s is the second fastest growing cause of death in the country after Alzheimer’s and that’s usually news to lawmakers. And like I mentioned, the number one risk of getting Parkinson’s is old age and our population is aging very quickly. Then I tell them my story of how it’s affected my life, of initiatives that need funding so we can get ahead of the curve.

By telling our stories it has a personal and emotional appeal. That seems to get their attention.

Q. Can you point to a specific moment where you feel you’ve had a positive impact on someone?

I met with a staff member of Senator Feinstein’s office and was an M.D. who did work with Veteran Affairs and he had patients with Parkinson’s. We connected very quickly because he was very impressed that I’ve had it for six years and I was as functional as I was. Some people with Parkinson’s sometimes do not speak very well and will whisper or have trouble talking. The staffer said, “You’re talking fast and I can understand you, but I cannot keep up with you when I’m taking notes” He was really happy for me and I gave him a logical argument, “Parkinson’s is the second fastest growing cause of death in the country, do you want to get ahead of it or do you want it to slam into the country and have it cost more money?”

I would not say this is advocacy because I’m part of a support group and I’m very out about my Parkinson’s people come to me, including a friend whose dad and sister have Parkinson’s, and I met with my friend to give her Parkinson’s 101, discussing with her what would happen if she got the disease. It’s helping other deal with the disease. That gives me satisfaction.

Another guy in our support groups was afraid to tell people at his job that he had Parkinson’s disease. I was very stern with him about telling his human resources department so you can get protection under the Americans with Disabilities Act. He was still afraid to do it but he finally did. He was far enough along that you knew that something was up. The way the law is, if you get fired for non-performance you get nothing, but if you go out on disability there are a lot of resources to help you out.

Q. What’s the thing most people don’t understand about Parkinson’s as a disease?

There are many things because Parkinson’s should be called more of a syndrome. People experience it in different ways; there are many symptoms including tremors, losing your voice, losing your sense of smell, losing memory, anxiety, Parkinson’s induced depression, constipation, urinary urgency, and you do not know which ones you’re going to get—it’s a mix and match.

Before I got it, I just thought about it as “shaky hands” and that’s it. There are a lot of non-motor issues as well.

Q. What about stem cell research gets you excited?

The Scripps Research Institute in San Diego is doing a cooperative venture with people in Sweden and in New York to try to figure a way to create stem cells that would create new neurons in the brain. They basically inject these stem cells into the brain and they would help build new neurons that would produce dopamine.  What’s happened in Parkinson’s is that neurons that are producing dopamine are dying. That study is very interesting.

The other thing is a very basic concept, “disease in a dish.” Stem stems are converted to Parkinsonian neurons and put in a petri dish, where researchers apply different medicine to see if it helps. This helps gets medicine to the markets faster before you go to FDA-approved Phase 1 and Phase 2 trials.

Q. Do you believe there are going to be treatments for Parkinson’s disease in your lifetime?

I think and hope so, but “hope is not a strategy.” That’s why I work so hard and have participated in over 20 research studies.

Q. Why is the patient’s voice important in medical research advocacy?

It’s very motivating to researchers. Let’s say you build race cars, wouldn’t it be satisfying to see the driver win a race? It’s motivating to see your work pay off. It will help them get a picture of where the rubber hits the road. And most folks find that motivating. 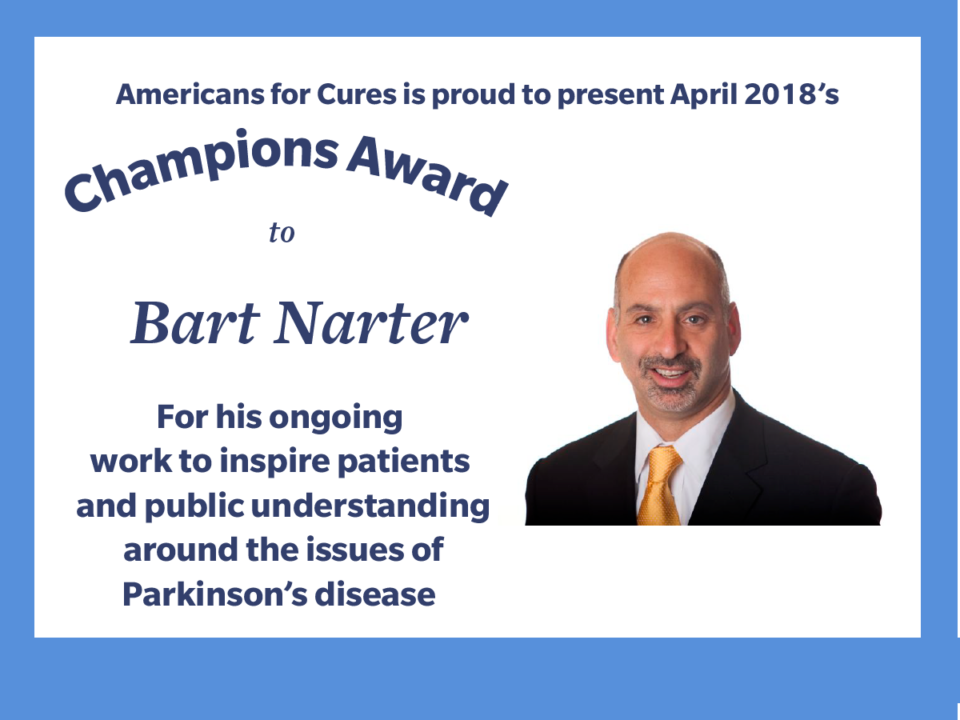