A Four-Year-Old Confronts Her Diabetes Head-On

At such a young age, Brooklynn was initially frightened: She suddenly had to keep track of her blood sugar levels constantly—a scary and strange thing for a child so small. While her friends dealt with the normal issues faced by children, Brooklynn had to confront the constant threat diabetes posed to her life. Despite being afraid of needles, she had to learn to inject her own insulin daily, which she did by the age of 6. She remembers being very sick when she was young and remembers thinking that it would eventually go away—but after a couple of months, she realized that it wasn’t going away; it was something she was going to have to live with the rest of her life.

But she had no choice, so she quickly learned to grapple with her condition.

Early on, Brooklynn understood her outlook would matter: She realized she could either face her condition with anger and self-pity, or she could face it with courage and strength, turning her wounds into wisdom, and make life better for others suffering from Type 1 diabetes.

Brooklynn chose the latter. She has used her diagnosis as an opportunity to act. And her parents encouraged her every step of the way.

“We initially joined the fight to cure T1D because it’s too painful watching your four-year-old daughter struggling with the disease. You have to join the fight,” says her father, Brayden. “Now as the years have gone by the most rewarding aspect has been watching Brooklynn grow up and become a prominent positive voice with her disease helping to motivate others to action.”

She joined the Juvenile Diabetes Research Foundation, and guided by her family, together they formed a walking fundraising team in 2004. As a JDRF Youth Ambassador, Brooklynn began speaking at small events for the JDRF at age 6. She found inspiration and hope through her advocacy and in spreading awareness, and continued working with the organization. By 8, she was speaking at galas, had spots on live radio and televised news programs. By 10, she was leading her own fundraising walking team, which has raised over $220,000 to date.  Her last walking marathon will take place the fall before she heads to college—something she says will be bittersweet.

Brooklynn’s Bandits, the JDRF team of family and friends

Brooklynn has always thrived in team environments, having grown up playing soccer, volleyball, and softball. Today, in addition to her diabetes activism, Brooklynn serves as a pitcher on her high school’s varsity softball team and plays guitar for her church group. She finds similarities between the teams she is a part of and the community that activism fosters: being able to communicate and interact with others and work towards a larger goal. Her biggest source of motivation comes from meeting researchers, scientists, activists, and other people with Type 1 Diabetes, and knowing that they are all doing all they can on every level to find a cure.

The motivation is clear: “Stem cell research is by far our best shot at getting a true biological cure,” says her father. 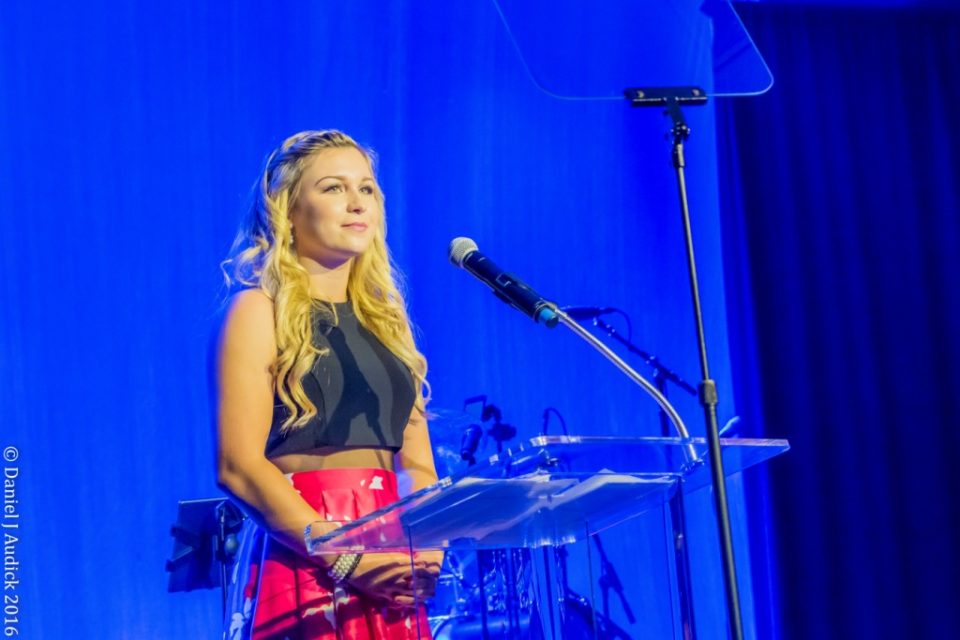 Brooklynn at 16 as the keynote speaker at the JDRF Gala

Brooklynn’s activism with Americans for Cures began in 2014, when she was invited to speak at the Americans for Cures Milestones of Progress Retreat at Stanford University as a patient advocate for T1D. She has since been working to understand the complicated biology behind Type 1 Diabetes, and is inspired to meet the scientists and researchers involved in the stem cell research she is advocating for.

As an Americans for Cures Patient Advocate Ambassador, Brooklynn retains her hope and spreads her hope for a cure, believing that the great hope to finding a biological cure to T1D and many other diseases lies in stem cell research.