How the California Stem Cell Program is Fighting Your Incurable Disease!

Without Don Reed, the stem cell voice in California would not be what it is today. Don’s journey in stem cell advocacy began almost twenty years ago with California’s Roman Reed Spinal Cord Injury Research Act of 1999- an initiative named after his son who was paralyzed in a football accident. Don later served on the Proposition 71 Patient Advocate Board of Directors, the citizens’ initiative which led to the creation of the California stem cell agency, now known as the California Institute for Regenerative Medicine (CIRM). Don currently serves as Vice President for Public Policy for Americans for Cures.

In his latest book, “California Cures! How the California Stem Cell Program is Fighting Your Incurable Disease!” Don details the early challenges of Proposition 71, the progress to find cures, and the road ahead for stem cell research in California. In Don’s own words, “We have the momentum… We dare not stop short. Chronic disease threatens everyone — we are fighting for your family, and mine!” You can purchase a copy of his book here, in eBook or hardcover format.

“We have the momentum… We dare not stop short. Chronic disease threatens everyone — we are fighting for your family, and mine!”

We sat down with Don to discuss his book and his experiences in the world of stem cell advocacy. Here is what we learned: 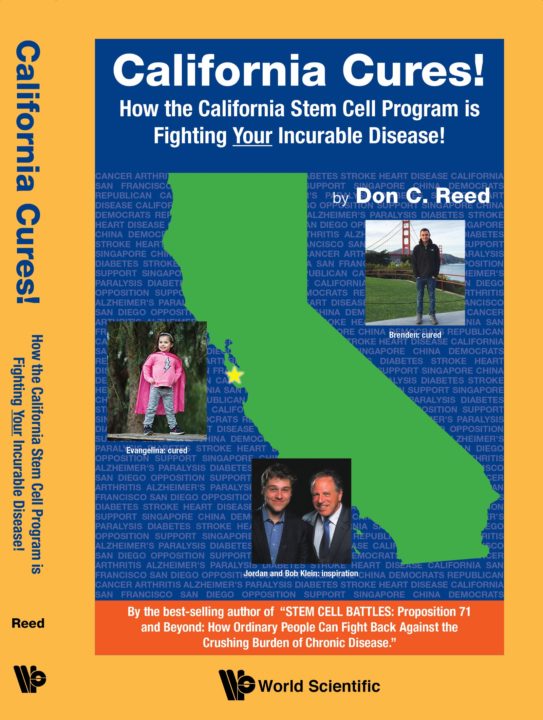 Why did you decide to write this book?

This is book two of a trilogy. The plan is to write a third book, linked to the first two, showing the birth, progress, and success of the California stem cell program, which to me is the greatest medical advance since penicillin.

What were some of the challenges of writing this book?

Steinbeck spoke of an “aching weight of inadequacy” when he was writing. I feel that with every word and page because the subject is so important and so huge. The scientists’ minds are so vast and their thinking so convoluted. It takes me eight-to-ten readings of their papers to get even a basic understanding of what they are trying to say.  After that, I have to try and put their thoughts into “people talk”, making it hopefully entertaining—while still being true to the science. It is a slow process, especially since the scientists vet the chapters containing their work.

What did you learn in the process of writing this book?

Above all, I learned that California was right in its decision to vote Prop 71 into law. So many diseases and disabilities are closer to having a cure now than they were before. There is also technical information I have struggled to absorb, condition by condition, that became more clear as I wrote this book. For instance, chickens can regenerate their inner-ear hair cells, but humans cannot—whereby we go deaf, and chickens apparently do not. Can stem cells be used to regenerate hair cells? We need to find out, and that takes funding.

While you were writing the book, what changes occurred in the world of stem cells?

Everything. I first wrote a fundraising request for an attempt to regenerate spinal nerves (with a product called Sygen, made from the tissue of cow brains) in 1994, when my son was paralyzed in a college football accident. Sygen was given an FDA clinical trial, but it was not considered successful.  Embryonic stem cells were not even discovered until 1998. (Adult stem cells were officially discovered in 1942 as part of the study of the effects of the A-bomb.) Today, we have a variety of possible ways forward, including reprogramming of skin cells to make them “embryonic-like,” and forms of gene therapy. Which one is best? The answer probably varies with the need. But without funding, of course, none can ever be tested.

What do you hope the readers will get out of this book?

First, that these cures are a matter of when, not if. CIRM offers a systematic approach to cures, bringing together all the various elements required. Because there is long-term funding available, we are now midway in the lengthy process of finding cures.

Second, I want readers to understand that scientists are people worth knowing and are friends who deserve support. Scientists chose their profession because they care about patients, and want to help. My favorite TV show is “The Big Bang Theory” because it shows scientists as non-intimidating people who love science. I included a chapter on this phenomenally successful show, because I get so sick and tired of hearing politicians say, “Well, I am not a scientist!”, as if that excuses them from knowing even just a few basics. I have no background in science except what I picked up along the way. If I can learn a little about different diseases and possible ways to treat them, so can a politician—and they must– in order to deal with the gigantic problem of chronic disease.

If I can learn a little about different diseases and possible ways to treat them, so can a politician—and they must in order to deal with the gigantic problem of chronic disease.

What has changed from the time of writing your first book to the second one?

Between my first and my second books, Americans for Cures was founded as a new organization with enthusiastic people working hard to report back to the public on the studies underway, in effect saying: “You trusted the California stem cell program to advance the battle against chronic disease and disability. You were right, and here’s why.”

How has the stem cell climate changed since the passage of Prop 71?

The heat surrounding the use of stem cells has left the issue. Members of both major parties support embryonic stem cell research, though by differing degrees. Republican leadership, however, still strongly opposes it, as did their 2016 Presidential platform, which calls for an outright ban. It is very difficult, however, to find Democrats who oppose it. This is not all good news, as people are not aware of the steady progress being made. When the attacks on research were being made, people became educated and support grew. Now, it is harder to engage with the slow, quiet progress of research being conducted in the labs.

How would you describe the difference between translational research and clinical trials?

Basic research discovers principles that will support further developments. Translational research is a next step using the principles previously discovered to find and develop answers to the various diseases. Clinical trials are the multi-step series of FDA-approved tests where the product and therapies are administered to humans. These trials are conducted carefully, with gradually increasing amounts, and test for safety first and then efficacy. This way, we can make sure the therapy is not harmful before seeing how well it works.

Who would be the “lead” in your book?

Bob Klein is the irreplaceable man — the practical visionary — capable not just of understanding the colossal vocabularies of scientists and to never forget the agonies of patients suffering, but also the multitude of steps that must be taken to make the dreams of cure come true. He saw what CIRM could be before the first words were put on paper. He weathered every storm from the lawsuits trying to shut the program down, to the legislations attempting to break CIRM into bits for a complete do-over — which would have been a disaster to the endless sniping attacks from those who hate “big government” and automatically oppose any major program, no matter how valuable. He listens carefully to the various viewpoints, and then responds with boldness and determination. As legendary frontiersman Davy Crockett once said: “Be sure you’re right, then go ahead” — that’s Bob.

Editor’s note: Bob is the founder and chairman of Americans for Cures.

What is one misconception about stem cells that you would correct?

That there are no shortcuts. Right now, with cures so much closer than ever before, there is a temptation to leap ahead and take desperate chances. That way lies the death of our dreams. Like the three women who trusted someone to inject stem cells into their eyes, and then went blind—things can get worse.  That is why the seemingly endless FDA tests are vital and must be done. The microscopic bits of tissue are powerful and cannot simply be injected into the body while hoping for the best. We must figure out what will happen, and then proceed gradually and carefully. The Hippocratic Oath, “First, do no harm,” must be the researcher’s guide.  But with this caution noted, cures are coming faster than almost anyone expected. There are children and adults alive today who would literally be dead if not for CIRM. Lives have been saved, and suffering eased.

Is there anything else you would like to add?

The legendary singer/entertainer Al Jolson once had the unenviable task of following Enrico Caruso. At the peak of his abilities, the immortal tenor had the crowd in tears. Again and again, their applause brought him back. Finally, exhausted, he quit the stage. It became quiet, the audience held its breath — and Al Jolson bounded onto the stage, saying: “Hang onto your hats, folks — you ain’t seen nothing yet!”

You can learn more about Don Reed by visiting his website https://www.stemcellbattles.com/