Get To Know Dr. Craig Walsh & His Research On MS

We spoke to Dr. Walsh about his research and how stem cells are offering insights into MS. 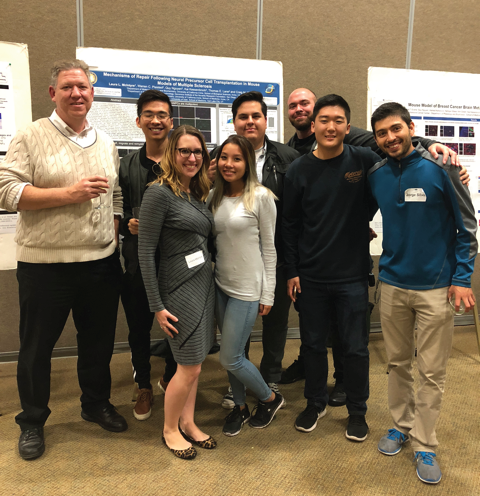 Q. What is one new and exciting stem cell discovery in your area of research?

There was an exciting discovery in 2017 that wasn’t even from my lab! But it was an important one from a group in Ireland:

This study showed that a population of T cells called regulatory T cells or Tregs (a subpopulation of immune cells that suppress autoimmune disorders like multiple sclerosis) can talk with cells in the central nervous system (i.e. brain and spinal cord). Tregs were shown to promote transformation of a population of cells called oligodendrocyte progenitor cells (immature stem cells that later mature and “insulate” our nerves) into their mature forms.

This was a huge paradigm shift! Why? Because when it comes to autoimmune diseases, we usually think about the adaptive immune system (the part of the immune system that contains T cells) as harmful; especially in diseases like multiple sclerosis (MS) where T cells induce demyelination; this means, they are attacking that insulation on our nerves and making them “naked”, just like a naked electrical wire that shorts and cannot conduct electricity. But as it turns out, the cells of the adaptive immune system and Tregs directly communicate with cells that are involved in repair (those oligodendrocytes we just talked about) and naturally protecting us from MS.

Further, most MS patients experience relapsing-remitting disease where the patients get sick for a while and develop some paralysis (the relapse phase) and then start to feel better and undergo remission. What’s interesting is that we know there is a massive recruitment of Tregs in the CNS and this occurs roughly when the clinical symptoms peak. For a long time, we thought these Tregs were being brought in to be anti-inflammatory but now we know they can also induce repair. So this tells us that in the context of damage in CNS, these Tregs can have an important role in “licensing” repair. You don’t want to bring in people to build houses when there is a war going on! So a lot of communication is going on between cells of the immune system and those promoting regeneration/repair. That’s a major change in our way of thinking about T cells and what they’re doing.

Q. What is the best way for advocates to rally support for stem cell research?

This is tough because the media is often about soundbites and getting the public’s attention in any way possible, which can be misleading. There are 2 key challenges here: 1) There are so many important causes – cancer, Alzheimer’s disease, Huntington’s disease, etc. How do we get people on board about the importance of stem cells? 2) How do we educate the public about the importance of stem cells for diseases like MS.

First, we have to grab the public’s attention. I’ve been very impressed with the whiteboard videos that Americans for Cures is making. If we can use these types of videos to get the word out to people through YouTube and Facebook, and encourage them to take a couple of minutes to learn about how a disease happens, its impact, and the great potential of stem cells, we can educate and give people hope. In the case of MS or other similar neurodegenerative disorders, we’re talking about a highly debilitating future for the patient. For example, cancer is horrible, but generally speaking, those who fight and survive it can live a long and productive life. Patients suffering from degenerative diseases like MS and HD face significant challenges for the rest of their lives since there are no cures. For a lot of these diseases, stem cells offer an approach that holds potential hope. Further, stem cells can guide our understanding of these diseases. They tell us how the pathways get set up early in life and how they might promote repair when we need it later. In short, I think the best way to rally support is to do things that can grab the attention of the public, educate them, and get the message out to them about how groundbreaking this is and how stem cells have the potential to go far beyond.

Next, it’s important to ensure that the education is not just “attention-grabbing” but also accurate. One challenge – and I have experienced this myself when I’ve been interviewed for news stories – is I look at the published piece and think, wait…that’s not really what I said! I can appreciate the fact that the media is trying to make the language understandable for the public, but the problem is that you need some amount of information to make a concept understandable and accurate at the same time. The key is to have scientists, like yourself, like myself, talking about these things. I’m on the board of the local MS chapter, and involved in fundraising. So I consider myself an advocate too. When I speak to a room full of people who are interested in MS and developing a cure, I try to explain what we’re doing, why it’s important and to give them a realistic perspective: We’re not going to come up with the magic bullet tomorrow but we’ll get there. It’s a process and an important one. There will be some mistakes but oftentimes mistakes lead you to the truth. People need to understand the reason you support CIRM is because there are breakthroughs that are coming and we need to keep that ball rolling so that we can ultimately make a homerun.

Q. You’re at a dinner party and someone asks you why you believe in the power of stem cells to treat chronic conditions. What is your response?

Depends on how long the party is and how many cocktails I’ve had!

I covered a lot of this in my response above. But to sum it up, if you understand stem cells, how they work, and when they don’t work, you can use that information to promote repair.

Stem cells offer a lot of hope because they’re designed to do what we ask them to do. Of course, they’re also complicated. We need to learn more about them. They’re constantly changing their spots, their environment, and what kind of signals they send and how they promote repair. That’s why we need to keep studying them!