Meet March’s Champions Award recipient, James Stewart. James had a successful career in the aircraft and high tech industry,  but it was interrupted after he was diagnosed with multiple sclerosis (MS) in 2007. James’ first symptoms were experienced in 2003 while cycling his favorite Sonoma county roads. Initially diagnosed with benign recurring remitting MS, his symptoms developed further into primary progressive MS. MS occurs when the body’s own immune system attacks the cells that surround and protect neurons. This protective covering is called myelin. As people lose myelin surrounding their nerves they start feeling weak or having trouble walking. It’s an unpredictable, often disabling disease of the central nervous system that disrupts the flow of information within the brain, and between the brain and body. James is a long time Americans for Cures Patient Ambassador, a relentless advocate for stem cell funding, and recently met with legislators to promote MS awareness.

We spoke to James to learn more about his experience of living with multiple sclerosis and what motivates him to do the amazing work he’s doing. 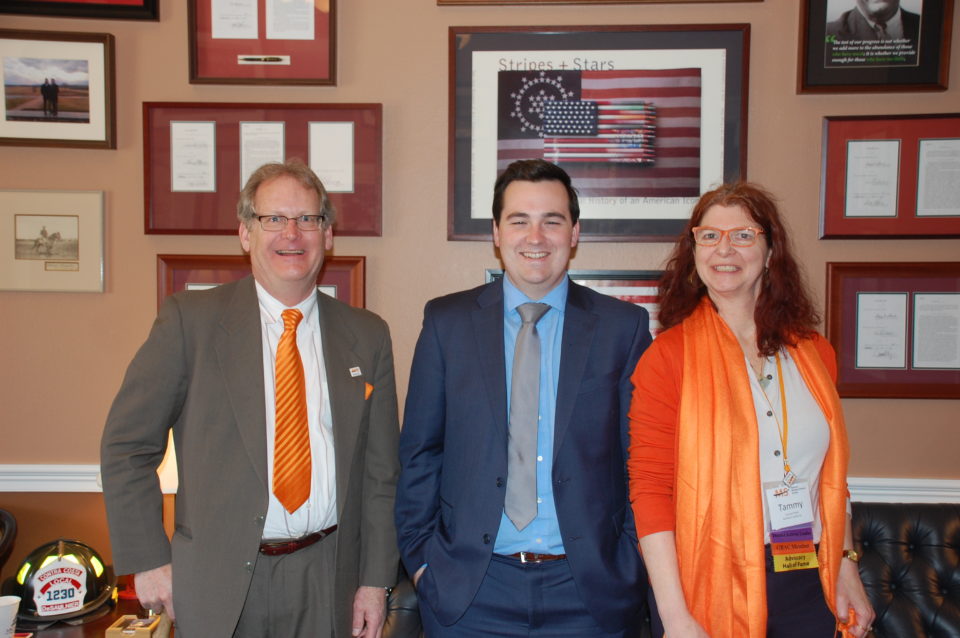 Q. How did you get involved in MS advocacy work?

My involvement started as I was diagnosed with MS. During that time I was a participant with bike rides to benefit people with MS and that led to a closer affiliation with the Multiple Sclerosis Society. I rode my bike for a number of years, but after it become clear that I wasn’t able to ride my bike as well as I had done in the past, I decided to focus my energy in a way that I would make a difference from a legislative perspective.

I signed up to be a district activist leader for the National Multiple Sclerosis Society. Part of that work is to just be aware of what public officials are doing on behalf of people who live with MS. And so I’m just basically learning what are the issues of public policy, and making sure that people who live with MS, their voice is heard.

After a couple of years of that work, the person who coordinated my efforts for NMSS pointed out the International Society for Stem Cell Research (ISSCR) summit was happening in SF, so I should go. And it got me interested in what was happening at the forefront of stem cells and how they might help people with MS. There was a public hearing portion of ISSCR that I attended. As I listened, there was really no mention of MS, so that raised my interest to get a little more involved with the stem cell community to understand what’s happening that could potentially benefit people with MS. That’s how I got connected with Americans for Cures, from the people I met at that conference.

Q. At that public hearing for ISSCR, people weren’t talking about MS?

There was a list of disease areas being studied in the presentation, and MS was not included. And I thought that was interesting. Why is that? So I started asking questions. And initially the response was that MS is a difficult disease area to study. So there wasn’t a focus on it, but then there wasn’t anyone speaking up on behalf of people living with MS. So I felt some responsibility to be an ambassador and to understand what’s happening with MS in the stem cell community and communicate those efforts out to people who are interested in what’s going on.

Q. When you started speaking up, researchers weren’t really talking about it?

To some extent. Being a part of Americans for Cures has made it possible for me to attend some stem cell summits. And that’s been fascinating to go and see in the research community what’s happening around MS. It’s one of my focuses to find the people working on MS and then talk to them, understand what they’re doing, and give them my perspective as a patient. Every one of these shows I’ve gone to, there have been people who have been focused on MS, looking into what causes MS and how to treat MS, so that’s been a nice aspect, for me to learn directly from the scientists.

So there are efforts out there, but it’s not very well publicized.

Q. What value does speaking to a patient like you gives to a researcher?

I’ve met a few scientists who didn’t know anyone with MS. They didn’t understand the disease so much. There are still plenty of people who don’t know what MS is. They do, oh, that’s muscular dystrophy or that’s Jerry’s Kids. They describe it as something other than what it actually is. And so I can put a face to MS and explain what it really is and how it affects the body and why it’s an interesting area to focus scientific research on. That’s some of the benefit that I provide in conversations directly with scientists. To sensitize them to the need for future research, to help them understand it’s an area of growing need.

MS is a pretty prevalent condition, with around 400,000 people in the United States living with MS. Every week, there are about 200 new people diagnosed with MS, and there are 2.5 million people in the world living with it, and when you think about that as a patient population, that’s a large group of people who need help. And so when they put it into that framework, scientists begin to be more interested in pursuing research that could benefit people with MS.

Q. What’s the most challenging part of advocacy work?

The most challenging part for a Patient Ambassador is understanding the scientific language. For a person not familiar with that it would be very challenging. Fortunately, I have a background in biology and I used to work at a bio-technology company. With my background in biology and understanding of my disease, I can understand them, and they can understand me. It’s rewarding to have that connection and for them to know that I’m interested in what they’re doing.

Q. Can you point to a moment where you feel you’ve had a positive impact?

I met a scientist, Johnathon Anderson, in Sacramento and we talked for hours about the MS work he’s doing. He told he was researching how exosomes could be a possible treatment for MS. He’s interested in how exosomes have a particular nutrient that could be used for an MS patient. It was an interesting conversation and I think it was useful for him to hear more from a patient’s perspective.

Q. Can you describe your experiences as a Patient Ambassador in talking to lawmakers and the general public?

It’s actually something every citizen in the United States should do at one point in their lives—meet with their representatives. Lawmakers have a responsibility to listen to their constituents and know what’s happening in their congressional districts. It’s a very organized process as far as setting up an appointment with your federal or state representative. Since they’re busy and meet with a lot of people, meetings are about 15-20 minutes. Therefore, as a Patient Ambassador, it’s important that you have a clear understanding of what you want to talk about and be sure that there is follow up to what was discussed. It’s important that they understand what your needs are as a citizen so they can take that input when they’re voting on something that affects you.

So if a patient with MS doesn’t raise the importance of treatments or educate their representative, it can be possible that the lawmaker will vote against a bill that benefits MS patients. That’s the benefit of doing patient advocacy.

Q. What’s your argument to lawmakers and the general public for invest in medical research into MS?

During my recent trip to Washington, DC, one of the things we asked for was for lawmakers to fund the MS research program at the Department of Defense that would provide $12 million for a program called MSRP. A large number of people that have served in the military have been diagnosed with MS. The Department of Defense recognizes that there might be something during these soldiers’ service that could be causing MS. There’s still no clear understanding to this situation and we can make the argument that, “California provided $3 billion to fund research and understand various diseases, so why can’t the federal government provide $12 million for MS?” That’s a very small amount at the federal level, but it would go a long way to help us understand what’s causing our service members to be living with MS.

Q. What about stem cell research gets you most excited?

There is so much going on in the stem cell research community. I try and keep track of what’s going on around the world with MS. Recently, a protein sequence was discovered that is believed to be triggering MS. Stem cell research can pinpoint what’s causing MS and allow researchers to focus on a certain issue and possibly find a cure. MS is an interesting disease since it’s an ongoing battle as your white blood cells are attacking your myelin, the protective coating of your nerve cells, which causes a great amount of fatigue. With stem cell research, you can potentially reverse the disease and figure out what’s triggering MS. That can lead to recovery from the ongoing damage caused by MS and regenerate the nerve damage. 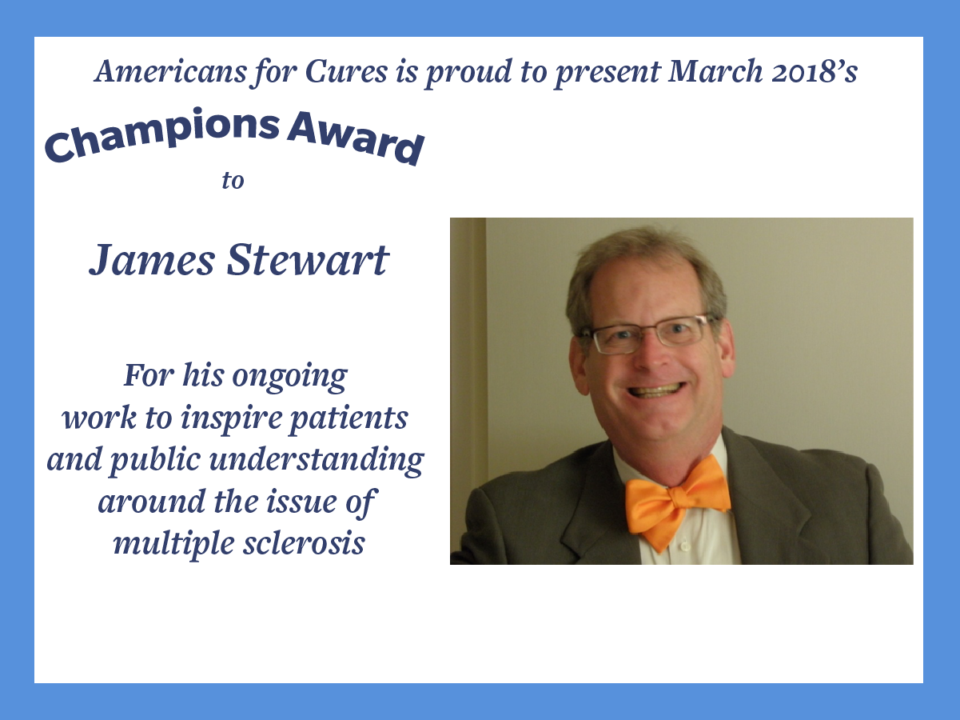